Natural Lapis Lazuli pendant, blue white pyrite sparkles, Twirly Too, silver twirl bail 72ct: mined in Afghanistan has pyrite inclusions
JimzGemz brings you novel gemstones- pendants & earrings that are made from minerals from around the world, and a few novel materials like Fordite (dried paint from the Detroit car paint booths, etc.) 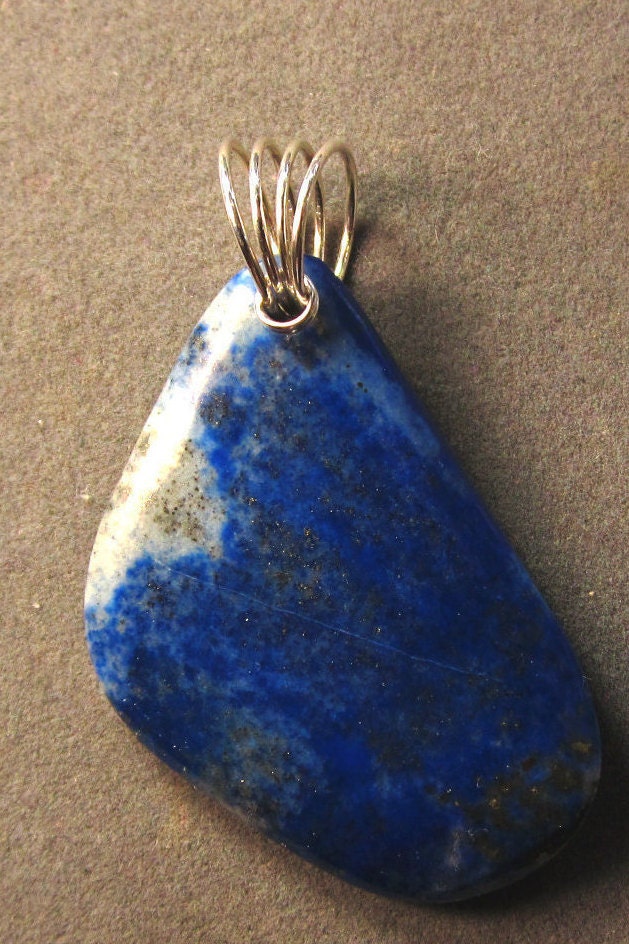 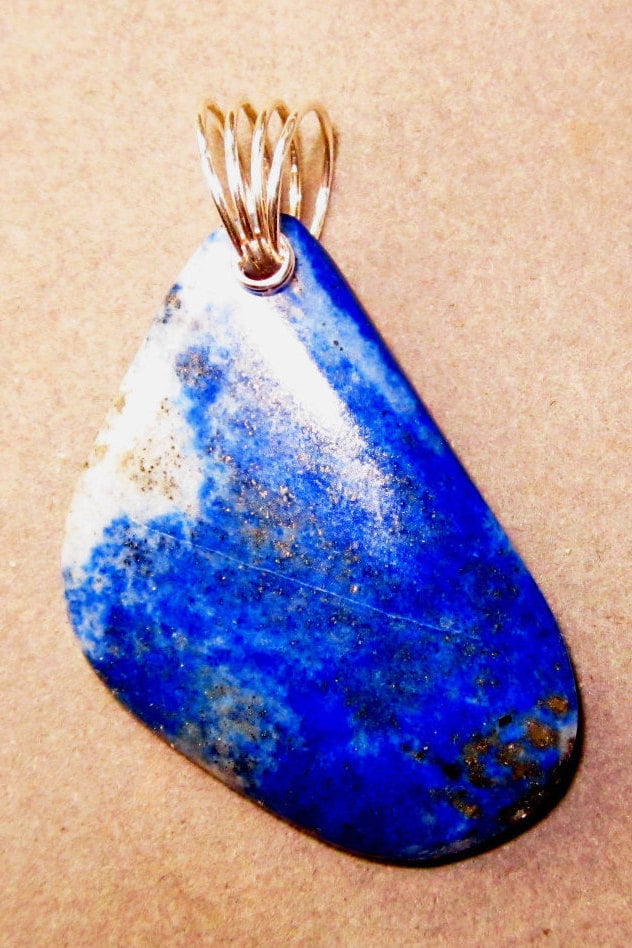 Lapis lazuli, often referred to as just 'lapis', has been used as a gemstone for thousands of years. It has been mined from Afghanistan since the early 7th millennium BC, and it was discovered in ancient burial sites throughout the Caucasus, the Mehrgarh and even as far as the Republic of Mauritania. The funeral mask for the ancient Egyptian pharaoh 'King Tut' was even discovered to have been decorated with lapis lazuli.
This historical stone has a name closely associated with its intense color. Its name was derived from the Latin word 'lapis' meaning 'stone', and from the Arabic and Persian word 'lazaward'. 'Lazaward" was the Persian name for lapis stone, as well as the name of its mining location. In other parts of the world, words for 'blue' were named after the color of lapis, including the English word 'azure'; Italian 'azzurro'; Polish 'azur'; Spanish 'azur' and Romanian 'azuriu'. Today, lapis lazuli is still considered to be one of the most important opaque blue gemstones available.
Lapis usually forms in crystalline marble through the geological process of contact metamorphism and due to its composition, it is technically defined as a rock rather than a mineral. It is primarily composed of lazurite, while the remaining composition is made up of sodalite, calcite, pyrite and other various minor constituents. The varying composition is what influences its exact coloring.
Lapis Lazuli is listed as the traditional birthstone for December. (Note that the official birthstone list adopted by the American National Association of Jewelers in 1912 denotes Turquoise and blue Topaz as the official birthstones.) It is also the Planetary stone for Capricorn and the birthstone for Libra. See the birthstone tables for additional references to lapis. Lapis may be given as a gem on the 7th and 9th wedding anniversary.
Lapis is considered a rock, not a mineral. It combines various minerals, mostly lazurite, but also contains calcite (white), sodalite (blue) and pyrite (fools' gold, a metallic yellow) and to be considered a mineral it would have only one component.
Top quality lapis lazuli comes from Afghanistan where is has been mined for more than 6000 years, but is also found in Siberia, Chile, the U.S., Pakistan, and Canada.
A strong blue, sometimes with a hint of violet, lapis lazuli's value decreases with the presence of white patches (calcite), while small veins of pyrite are often prized.
The Egyptians used Lapis for seals, ground it for an eyelid cosmetic and often carved it into vases and figurines.
A soft stone, 5 -5.5 on the Mohs scale of hardness, lapis lazuli is one of the most valuable semi opaque stones.
Beautiful pendant you can wear to add a statement to any outfit.