Natural Jade pendant, purple Turkish, free-form, brass bail 86ct
JimzGemz brings you novel gemstones- pendants & earrings that are made from minerals from around the world, and a few novel materials like Fordite (dried paint from the Detroit car paint booths, etc.) 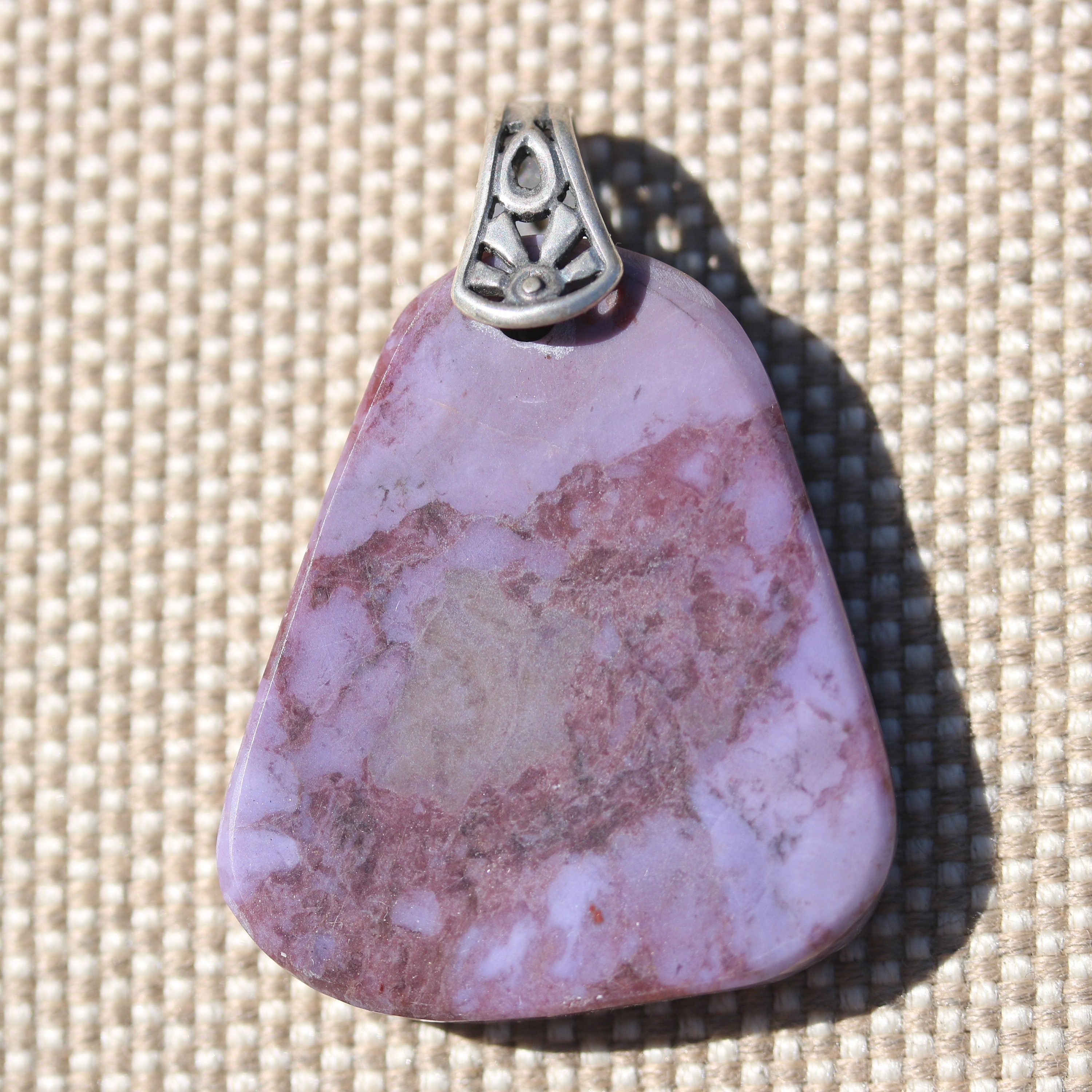 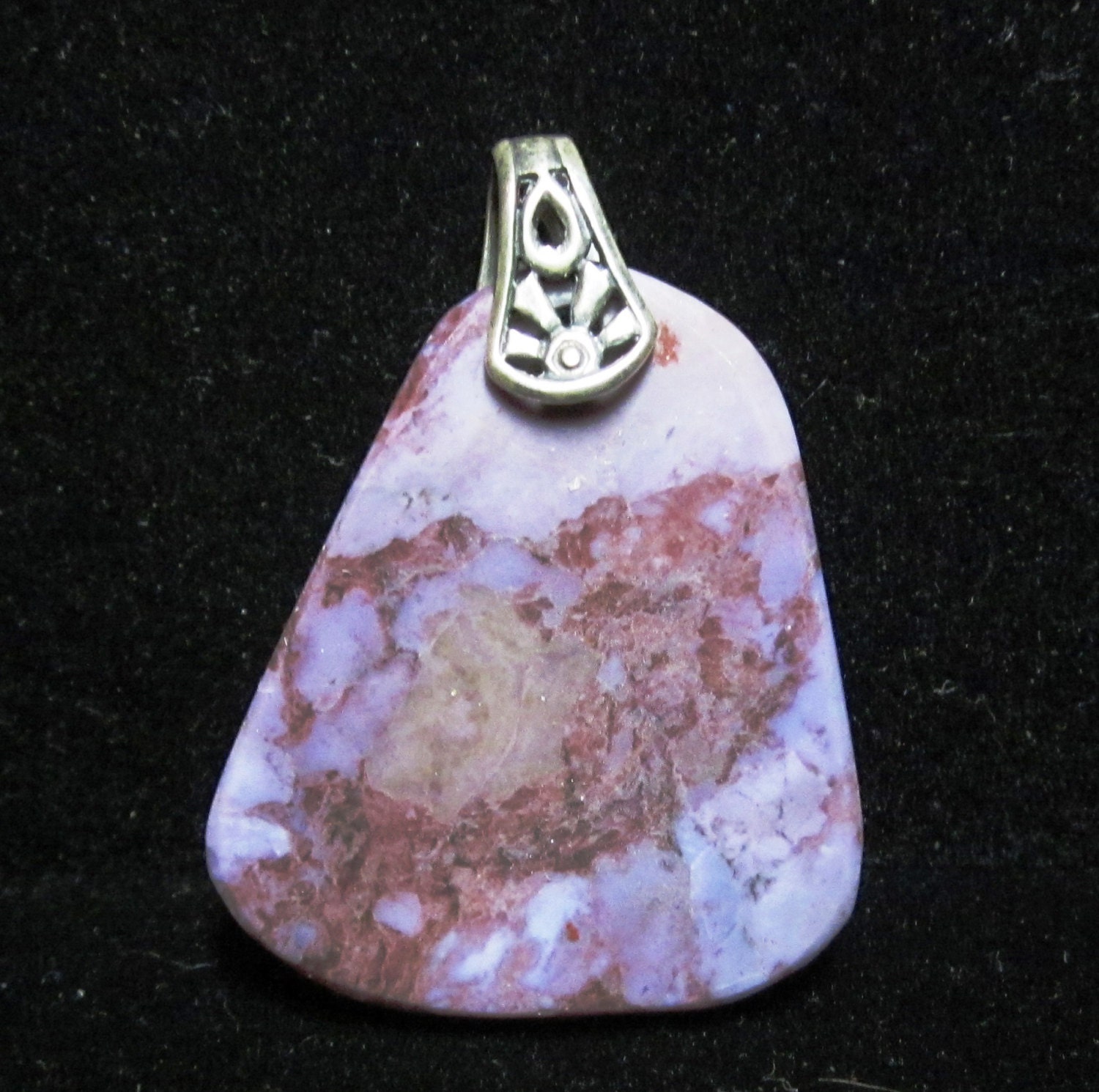 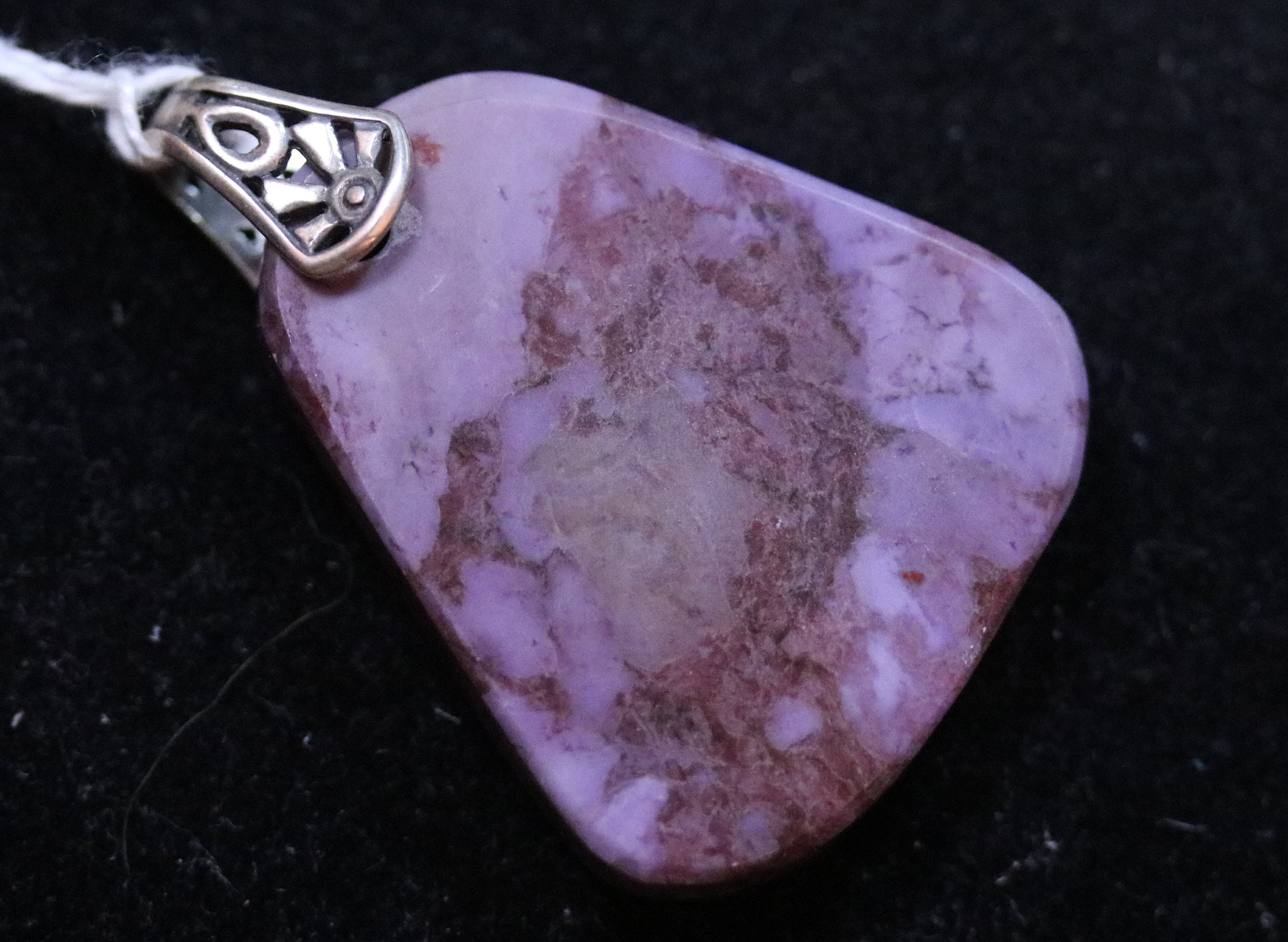 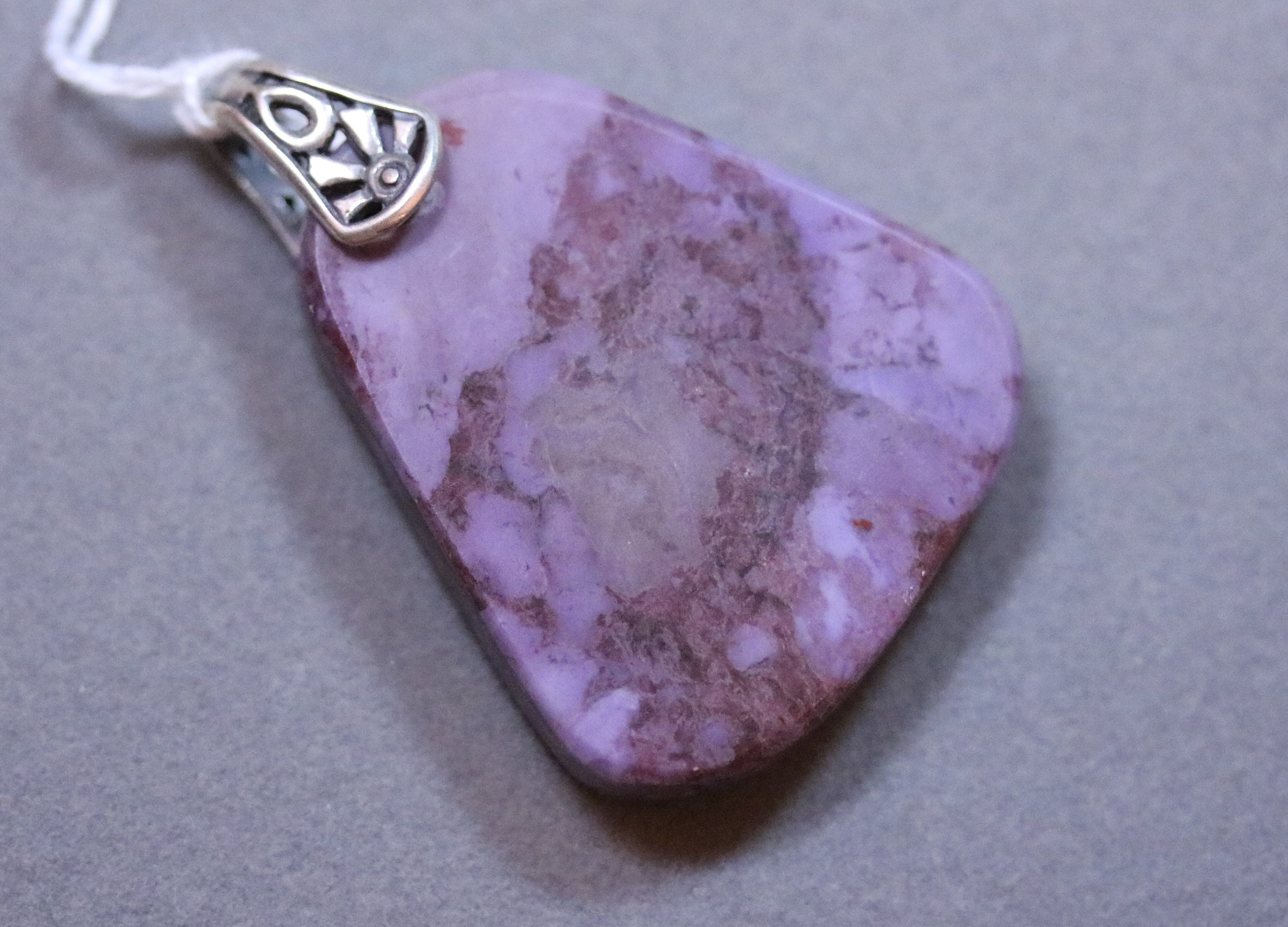 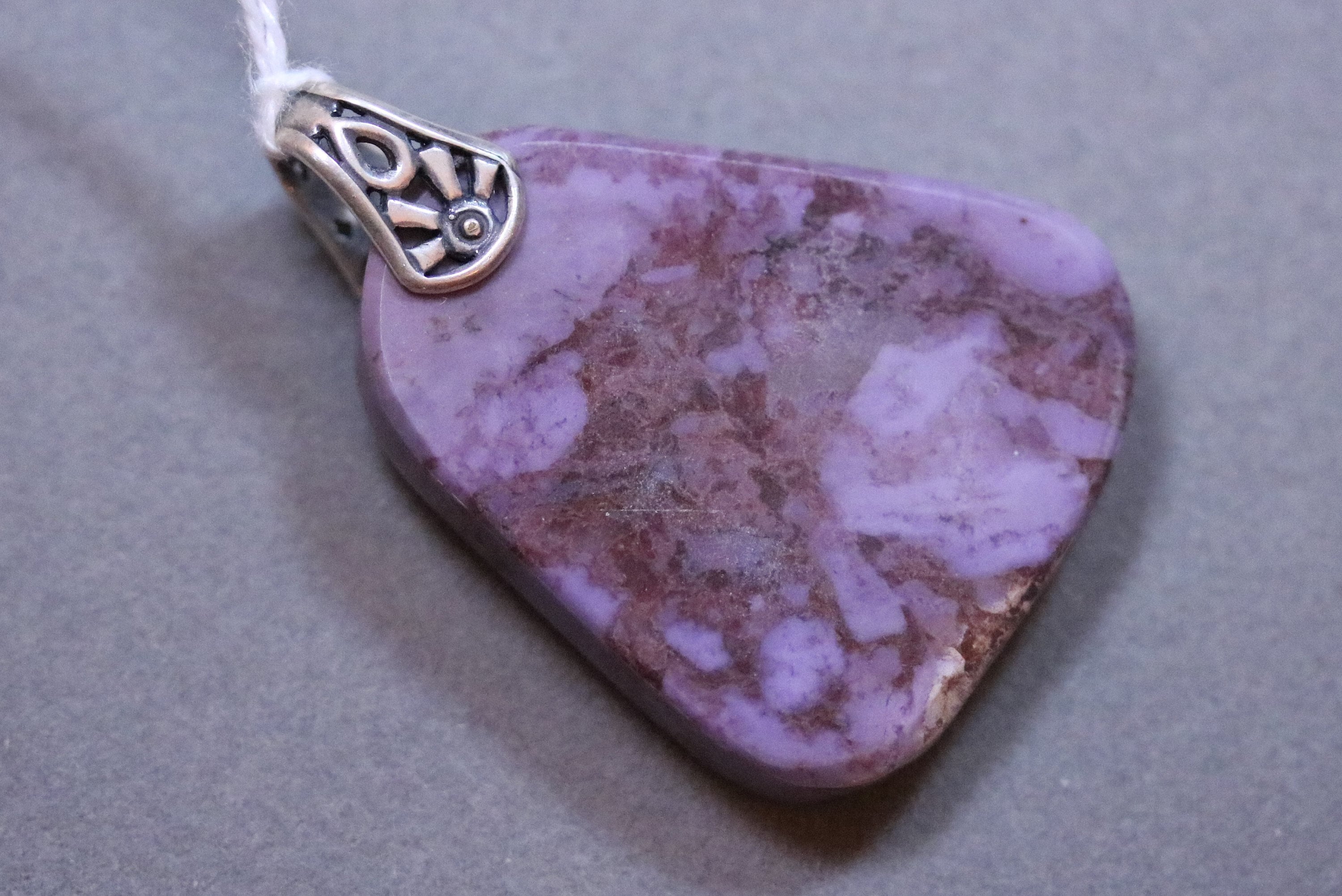 86ct ~ 17g ~ 2/3rd oz
1.5" ~37mm
Jade is one of the toughest of minerals. It is available in two types- Jadeite, which is an pyroxene, and Nephrite, which is an amphibole. Jadeite may be many colors, but Nephrite is almost always green, perhaps with black blotches in it.
The name jadeite is derived (via French: l'ejade and Latin: ilia[5]) from the Spanish phrase "piedra de ijada" which means "stone of the side". It was believed to cure kidney stones if it was rubbed against the side of the afflicted person's body. The Latin version of the name, lapis nephriticus, is the origin of the term nephrite, which is also a variety of jade.
Jadeite is a pyroxene mineral with composition NaAlSi2O6. It has a Mohs hardness of about 6.5 to 7.0 depending on the composition. The mineral is dense, with a specific gravity of about 3.4.
Jadeite's color commonly ranges from white through pale apple green to deep jade green but can also be blue-green (like the recently rediscovered "Olmec Blue" jade), pink, lavender and a multitude of other rare colors. Chloromelanite is a very dark green to black variety.[7] Color is largely affected by the presence of trace elements such as chromium and iron. Its translucence can be anywhere from entirely solid through opaque to almost clear. Variations in color and translucence are often found even within a single specimen. Jadeite is reported from California, US; Myanmar; New Zealand; Guatemala; Itoigawa, Japan;[8] other localities of jadeite include Kazakhstan; Russia; British Columbia, Canada; Italy and Turkestan.
Nephrite is a variety of the calcium and magnesium and iron-rich amphibole mineral tremolite or actinolite (aggregates of which also make up one form of asbestos). The chemical formula for nephrite is Ca2(Mg, Fe)5Si8O22(OH)2.[1]
While nephrite jade possess mainly grays and greens (and occasionally yellows, browns or whites), jadeite jade, which is rarer, can also contain blacks, reds, pinks and violets. Nephrite jade is an ornamental stone, used in carvings, beads, or cabochon cut gemstones.
Western Canada, British Columbia, is the principal source of modern lapidary nephrite.[2]Nephrite jade was used mostly in pre-1800 China as well as in New Zealand, the Pacific Coast and Atlantic Coasts of North America, Neolithic Europe, and southeast Asia.
Our Jade comes from several locations:
California Coast (Big Sur, near Jade Cove), light green,
British Columbia (light green),
Alaska (dark green),
Turkey (purple colored/lavender).
We also have Marcasite Jade (provenance unknown), very magnetic, and
Chatoyant Jade from Nevada.
This material is from Turkey.